The late Aditya Birla started his career with Indian Rayon.After he took it over, the workers went on strike,a fire broke out and losses spiraled.

The great GD Birla whose favorite grandson was Aditya Birla incessantly grumbled:”You have mounted Aditya on a decrepit steed”

The late Aditya Birla was of course able to turn Indian Rayon into a success. (source:Gita Piramal’s Business Maharajas)

GD Birla’s comments however hold lot of wisdom.Promoters can be compared to horse jockeys.Sometimes the horse (business) is so fast and swift that they gallop all the way to success.Sometimes even the best jockey can’t do much with an old nag.

But there are some jockeys (promoters) who are capable of changing horses(businesses) mid-stream and achieving greater success.This is a true hallmark of an outstanding businessman.

For instance,WB started with the textile business and then later moved on to insurance which propelled Berkshire Hathaway to great success.

In the Indian context, Dhirubhai Ambani started with trading,moved to textiles, then to petrochemicals and then finally oil &gas.

Are there any current businessmen who are outstanding jockeys capable of changing horses midstream?

Such an extraordinary businessman is Deepak Parekh.He started with HDFC, launched a bank,life insurance, general insurance and other wealth creating companies.If one had bought HDFC shares when Deepak Parekh started his career, one would have had a very comfortable retirement indeed.

On the  other hand, there are jockeys who will run their horse into the ground.But that’s a story for another day !!

Is the Govt any better than Satyam’s Raju ?(First Post)

Read an article in Bloomberg which underlines the case why Israel attacking Iran is historically inevitable.(see article here).

If such an event were to come to pass, what will be the implications for the Indian markets?

In case of a surprise attack, the following will happen as a knee jerk reaction:

What happens next depends on the duration of the war.

If it is a short lived war (like the First Gulf War), then it can set the stage for a rally in equities.

If the war turns out to be a longer one and one where the Straits of Hormuz are threatened,then oil prices will continue to remain elevated and the market will slowly and surely grind downwards.

Lesson for long term investors:Keep your powder dry, better opportunities may be round the corner ! 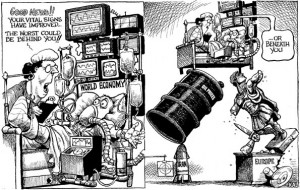 In the Stock Market Wizards, Dana Galante mentions that high management turnover  is a good red flag that things are not hunky dory in the company.

This certainly holds true in the Indian context as well.

Consider for instance the aviation sector in India.Numerous CEOs have come and gone in Jet Airways,Kingfisher Airlines and Air India.This should have served as a good warning sign to investors to stay clear of the sector.

The resignation of the CFO/Compliance officer often indicates bearish times ahead for the stock.This is true for midcap and smallcap companies and not so much for A Group companies.

These officials are usually professionals (non promoters) and have no qualms in deserting a sinking ship !

Company Secretary of Clutch Auto resigned on 15th Nov, 2010.Since then, the stock is down 60%

This is illustrated by the following example:

Tea Stocks may be a hot favorite(BusinessLine)

Is this the best stock market indicator ever? (AdvisorPerspectives)