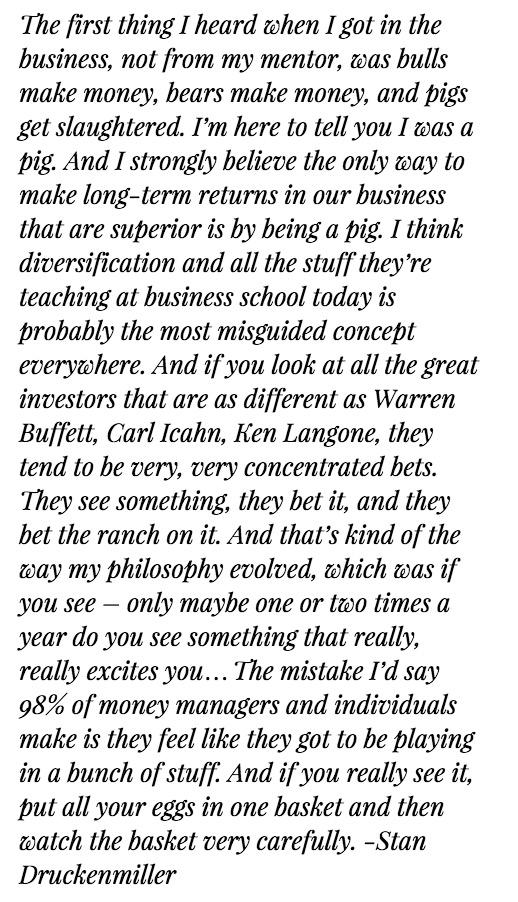 I’ve learned many things from him, but perhaps the most significant is that it’s not whether you’re right or wrong that’s important, but how much money you make when you’re right and how much you lose when you’re wrong. The few times that Soros has ever criticized me was when I was really right on a market and didn’t maximize the opportunity

The way to build long-term returns is through preservation of capital and home runs. You can be far more aggressive when you’re making good profits. Many managers, once they’re up 30 or 40 percent, will book their year [i.e., trade very cautiously for the remainder of the year so as not to jeopardize the very good return that has already been realized]. The way to attain truly superior long-term returns is to grind it out until you’re up 30 or 40 percent, and then if you have the convictions, go for a 100 percent year. If you can put together a few near-100 percent years and avoid down years, then you can achieve really outstanding long-term returns.

Soros is also the best loss taker I’ve ever seen. He doesn’t care whether he wins or loses on a trade. If a trade doesn’t work, he’s confident enough about his ability to win on other trades that he can easily walk away from the position. There are a lot of shoes on the shelf; wear only the ones that fit. If you’re extremely confident, taking a loss doesn’t bother you.

The latest speech by one of the all time investing greats

“I particularly remember the time I gave (the research director) my paper on the banking industry. I felt very proud of my work. However, he read through it and said, ‘This is useless. What makes the stock go up and down?’ That comment acted as a spur. Thereafter, I focused my analysis on seeking to identify the factors that were strongly correlated to a stock’s price movement as opposed to looking at all the fundamentals. Frankly, even today, many analysts still don’t know what makes their particular stocks go up and down.”- said Stanley Druckenmiller