BSE Ltd. has now applied for an extension in trading hours for the equity market as well, Managing Director and Chief Executive Officer Ashish Chauhan told BloombergQuint in an interview. “All of us need to work hard. India needs to develop further.I am sure investors will slowly adjust (to the extended trading hours) like we did in 1994-95.”

The exchange’s shares have declined nearly 21 percent so far this year, while the benchmark S&P BSE Sensex Index has risen over 14 percent during the same period.

Maybe this is Ashish Chauhan’s way of screwing the investor community for not trading on his exchange.

Today morning, Indigo sent out a remarkable release to the exchanges: 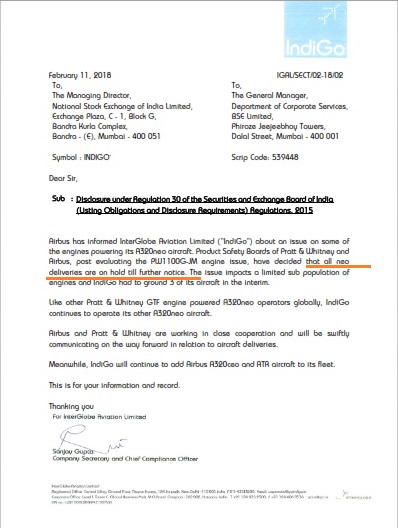 What is interesting is that on 24 Jan, 2018, the management said the following in it’s earnings transcripts call:

Basically, “All is Well”…nothing to worry.

But as this expose by Times Now shows :

At least 23 aircraft of Indigo Airlines had 69 engine failures over a span of 18 months between March 2016 and September 2017. A mega investigation by Times Now has revealed that the airline suffered about four engine failures every month over this period, thus risking lives of passengers on various routes.

Basically, “All was not well” and the management did not communicate the same to various stakeholders.

Galaxy Surfactants got listed today and is trading around Rs.1,600 levels.

Around 23 years back, the Company made an appeal to investors to invest in their company as can be seen from the letter below:

Since then, the company has given bonuses and dividends taking the effective cost price of the shares to negative.

This is a great example of how a honest, hardworking and efficient management can create wealth for its shareholders.

Vakrangee stock price has been plummeting in the last few days.

Even today, it is at the lower circuit as can be seen below: 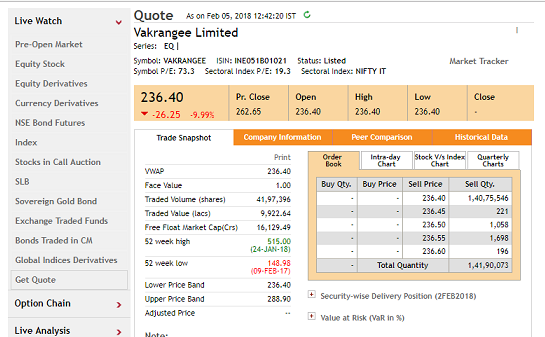 The management at Vakrangee is understandably perturbed and has released a Letter to shareholders explaining the situation.

This letter contained this excerpt:

The heading is of course a clear cut murder of Tagore’s famous poem ‘Where the mind is without fear’ which goes like this:

Where the mind is without fear and the head is held high
Where knowledge is free
Where the world has not been broken up into fragments by
narrow domestic walls
Where words come out from the depths of truth
Where tireless striving stretches its arms towards perfection
Where the clear stream of reason has not lost its way into the
dreary desert sands of dead habit
Where the mind is led forward by Thee into ever-widening
thought and action
Into that heaven of freedom, my Father, let my country awake.

Respected management of Vakrangee, a plummeting stock price does not give you permission to butcher one of our favourite poems

One of the landmark achievements of Indian democracy was the integration of various princely states within it without much bloodshed.

In fact,once the Soviet Premier Khrushchev commented “It’s remarkable how India has managed to liquidate the Princely states without liquidating the Princes”

One of the main reasons why the Princes went quietly was the promise of the Privy Purse…a regular pension paid to them and their families by the Govt of India.

After some years,the Govt of India, under the leadership of Indira Gandhi went back on its word and abolised the Privy Purse.

The case went to Court and there the great Nani Palkhivala made the following argument:“The survival of our democracy and the unity and integrity of the nation depend upon the realisation that constitutional morality is no less essential than constitutional  legality.  Dharma (righteousness; sense of public duty or virtue) lives in the hearts of public men; when it dies there, no Constitution, no law, no amendment, can save it.”

Fast forward to the present.

In 2004,Chidambaram did away with LTCG in his budget stating the following:

Capital gains tax is another vexed issue. When applied to capital market transactions, the issue becomes more complex. Questions have been raised about the definitions of long-term and short-term, and the differential tax treatment meted to the two kinds of gains. There are no easy answers, but I have decided to make a beginning by revamping taxes on securities transactions. Our founding fathers had wisely included entry 90 in the Union List in the Seventh Schedule of the Constitution of India. Taking a
cue from that entry, I propose to abolish the tax on long-term capital gains from securities transactions altogether. Instead, I propose to levy a small tax on transactions in securities on stock exchanges

Note the word instead.It was both an implicit and explicit promise to the people of India.

Now,we have Arun Jaitley as the Finance Minister breaking this promise by bringing back the LTCG but not scrapping the STT !!

Have you no sense of Dharma, Mr.Jaitley?