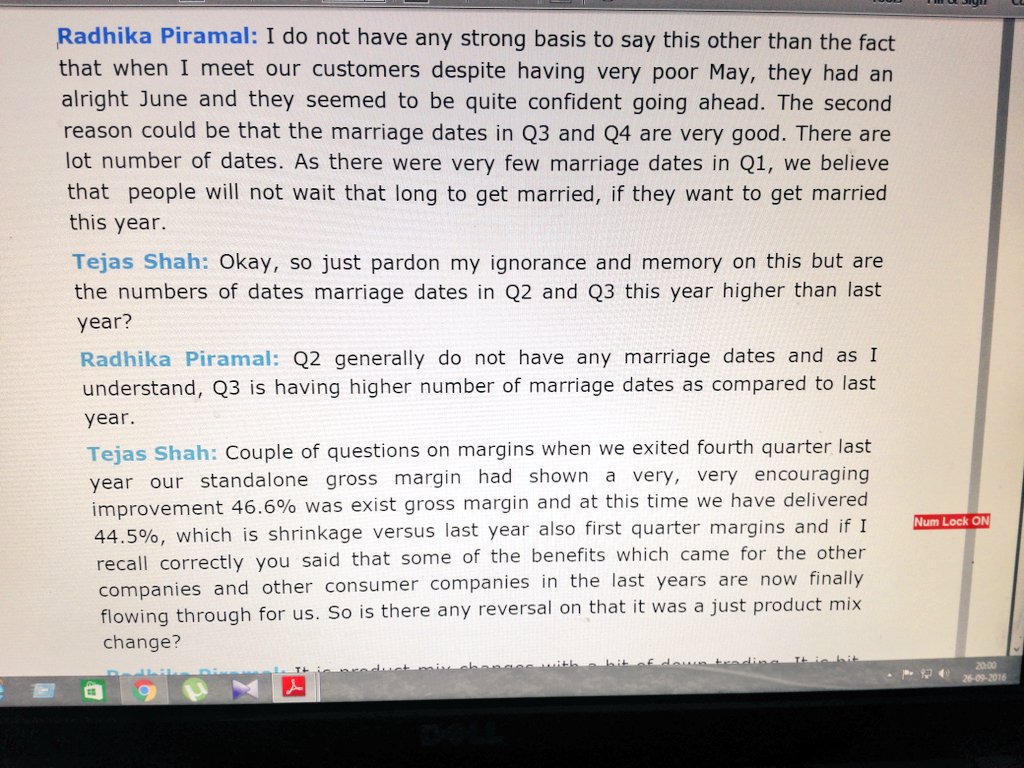 Moderator Thank you. The next question is from the line of Sameer Arora from Helios Capital. Please go ahead.
Sameer Arora: Could you just explain on the 290 employees that you are firing? What is the base of employees in Mumbai FTWZ there and what is the breakup, how many of these are like senior guys who would have been in the head office kind, who I guess would be making this conversation with the press, could be the workers who are doing this I would guess? And also, whether those guys have accepted this and is it easy to fire so many employees so fast how does that work?

Ajay S. Mittal: It is only about 40 people from the FTWZ, these are not labor category people, these are supervisory and maybe some people who have been hired extra. As I explained earlier that this is a new business and we hired people to be very honest, I never run an FTWZ, none of the people who I have ever run an FTWZ and we did hire people based upon certain assumptions and when you relook at what you hired extra, you need to one day sit down and take a call and say, hey, listen in the best interest of the company we need to ask people to go. People at various levels, there are people from the IT department, who have taken for certain IT projects in terms of SAP implementation and so on and so forth. From the head office really nobody has been asked to go as such. There have been a couple of senior members from the sales team and somebody from our freight forwarding Arshiya logistics department who was heading the department has been asked to go because purely a non-performance, those were on non-performance basis. This is normal cycle. And there is no hard and fast rule of how we should do this. We were told that it is….

Sameer Arora: But first of all what is the denominator? When you say 290 looks like a massive number. How many employees are there in the company?

Ajay S. Mittal: As you know that there are in excess of about 1700 employees and these are direct employees and indirect employees are over 1000 plus and we feel that especially in the FTWZ and as we are bringing in more and more efficiencies in the systems through IT and usage of better technology and making ourselves also more efficient, I think that has been the reason and this is not the exercise which was done just yesterday, it was something that has been in the pipeline for us to do over the last three, four months and it has taken us that much time sitting
Arshiya International Limited with the various head of department and working out the list, looking at the processes, looking at the hiring external agencies to help us and understand certain time and motion systematic studies and so on and so forth and that is where we have decided that this is the kind of people that needs to go out of the company, to reduce the freight and increase our efficiency as well as increase our profitability by decreasing our cost. And this was done. Why the exercise needs to be done? If you look at companies like Infosys which has announced that they are retrenching 6500 people could be on low order basis or the orders are not coming in. That has not been the case with us, it is just that we are in a new business scenario and we have hired more people and I thought it is prudent that we do not continue having people that are not needed in the organization. And if I was to do this over a six month period not only would we suffer financially, but we would also have people, good people going out of the company would be shaky if you have a firing scheme every week of ten people, then everybody in the organization is very, very scared, even the good people will start feeling that tomorrow maybe my turn. So we had to do this in one shot.

Sameer Arora: The way it came in the news paper, it said some 55 names. So all these guys have accepted it or they are shouting about it or they have been violent on it or have they blocked the gate or have they taken their dues and gone away?

Ajay S. Mittal: Good question. To be very honest as I said out of the 290 only 93 or some odd employees were asked to leave on the first day, departure on three days but we stopped the operation after first day because of this situation that we are facing as of now but to be very honest there were six people in the FTWZ who are asked to leave, who are from the villages nearby. Next morning after they were asked to leave — and they were given their dues — they came up to the gate along with some 40, 50 villagers and they called people from inside, about 160 people were inside and they called people from inside, saying if you do not come out then when you are going home in the evening we are going to break your hands and legs, some 30, 40 people went and joined that group, police was called, two, three hours of drama, everything was dispersed and then business as usual out there. That was that thing which happened day before yesterday at the gate and that is exactly what I called as hooligan and that is why I said that to the press when he called me at 9.30, he only asked me one question, what happen at the FTWZ and this is my answer to him and that is what he quoted, but he never asked me about anything that is alleged in the newspaper and I am clarifying once again that it is all wrong, these rumors are absolutely baseless.

Sameer Arora: That we totally agree with you. We have full faith in that part. So today, if we go to the gate there would not be people standing outside?

Ajay S. Mittal: No, we have business going on as usual.

Sameer Arora: Because in a logistics business I was worried on the first day whether if all these things are time, the Cisco guys say I want it in two hours were they allowed to have his goods exit from the warehouse in two hours those who have met.

Ajay S. Mittal: Absolutely. I am also very proud to say that I have a fabulous team of people who are serving us in the FTWZ, fearlessly have done their jobs, even with 30, 40 people less. I had people at HoD level from Arshiya supply chain driving material handling equipment if necessary on that day. They have delivered on time. We had police protection. No goods were stopped coming in, no goods were stopped from going out whatsoever.

Sameer Arora: In some sense can we say that because you said today you subscribe to 42 crores of warrants. In a sense you had a choice to pay off the margin, whatever the margin call guy or to exercise. So hopefully the margin guy will also take solace from this fact or he has to be separately paid something or given more shares or whatever?

Ajay S. Mittal: This is after taking into confidence most of the people that we borrowed money from including banks. I am talking to some investors, friends that this would be the best way to address the entire investor community. Sameer, I know you and a lot of investors know me personally and know the company in depth because you have visited the facility and all that, but there are so many out there who have not done so a smaller and they are the ones who are hurting a lot, I do not think you are not hurting a lot today with the price, but let me assure you that this was the best thing that we thought and even the lenders again shared thought that this would be the best way to instill confidence not only in them but in the entire community.

Sameer Arora: Last question, so therefore does this address one other issue that we all had and everybody else had that now future expansions because of environment which we would have said, we could have done voluntarily anyway, but now they are shut off for one or two years and we sweat the assets in Delhi and Mumbai and put a limit on new CAPEX?

Ajay S. Mittal: You are spot on, Sameer but the second phase of the Bombay FTWZ which has been going on will carry on, where we have a financial closure that will carry on.

Ajay S. Mittal: Our accounts are all standard. We have no issues. Some delays here and there which are happening all over but no issues as such, they are being addressed, bankers have been met regularly. No issues whatsoever. The show is going on very well. I do not see any situation to be alarmed about but for what happened yesterday with that article and then the market thrashing between yesterday and today, but I am sure this will reverse — I have gone on television on three channels today and clarified our position. I was hoping to do so before the market hours but then I was let down by one of the news channels without naming them, but it did not happen, but we have now done what was needed to be done and I am also addressing, I have already addressed the lender community which is including the bank and the people that we borrowed which are not from the banking sector, loan against shares also, each one of them and now I am addressing the investor community. So I think that covers everything and the guilty who have made false allegations would probably get punished because we made the relevant complaints to the relevant authorities