(Disclosure:I am market making in the shares of CSB)

A proposal to this regard has also been submitted to the Reserve Bank of India, sources said. “The bank needs constant capital …we are talking to many investors including Fairfax,” said S Santhanakrishnan chairman, Catholic Syrian Bank. A mail sent to Fairfax Financial did not elicit any response until press time Sunday.

Catholic Syrian Bank is a 95 year old bank based out of Kerala.

It has filed for an IPO and has already received SEBI’s final approval to list.

There are press reports that a group of PE firms- TPG Growth, TA Associates, Apax Partners, IVFA, Everstone, Kedaara and Multiples-are looking to pick up 25%-35% of Catholic Syrian Bank.

Last time,the bank placed shares in October 2014 at 180 Rs/share and followed that up with a rights issue in March 2015 at 75 Rs/share in the ratio of 1:3 effectively making the last placement price 153.75 Rs/share

A limited quantity of shares of Catholic Syrian Bank are available at a significant discount to this valuation as well as 31 March 2015 Book Value of Rs.147.25

For those interested,please email me at Alpha Ideas.

(Disclosure:I am market making in the shares of Catholic Syrian Bank)

The government on Thursday said it has cleared 23 foreign investment proposals, including that of Catholic Syrian Bank and Bandhan Financial Services, amounting to Rs 10,378.92 crore.

The investment proposals were approved following the recommendation for the same by the Foreign Investment Promotion Board (FIPB), headed by Finance Secretary Rajiv Mehrishi.

Besides, private sector Catholic Syrian Bank has got clearance for raising foreign investment limit in the bank from 49% to 74%. The proposal is worth Rs 1,200 crore. The bank has recently got nod for IPO.-from DNA

Foreign investment in the bank is currently at 30 per cent—19 per cent with individuals and 11 per cent with FIIs. The move from the bank comes as it is preparing for an IPO worth about Rs400 crores.

The firm is expecting support from foreign investors as well as NRIs. The share of foreign companies would be a deciding factor with regard to share prices when the firm goes public.

Even after foreign investments are hiked in these banks, it would not mean that they would go into foreign hands because that would need foreign majority in the board of directors of the bank, which is a distant possibility.

However, analysts are of the opinion that such a situation could arise if foreign companies are allowed to increase their stake in local firms. In such a case, local small banks could be the first targets for board-level manipulations and subsequent takeovers.-from Manorama

(Disclosure: I am market making in Catholic Syrian Bank and if anyone wants to buy/sell CSB, please email me at Alpha Ideas )

Catholic Syrian Bank has received capital market regulator Sebi’s approval to raise up to Rs 400 crore through an initial public offer (IPO).
The company in March had filed its draft red herring prospectus (DRHP) with Sebi through its lead merchant banker, ICICI Securities.

Sebi issued its final observations on the draft offer documents on June 23, which is necessary for any company to launch a public offer.

“The bank will issue equity shares aggregating up to Rs 4,000 million,” the draft papers stated.

Besides, the mid-sized private lender is considering to raise up to Rs 150 crore through pre-IPO placement .

The proceeds of the issue will go towards augmenting the bank’s capital base to meet its future capital requirements.
–from ET

I am market making in Catholic Syrian Bank and if anyone wants to buy/sell CSB, please email me at Alpha Ideas. 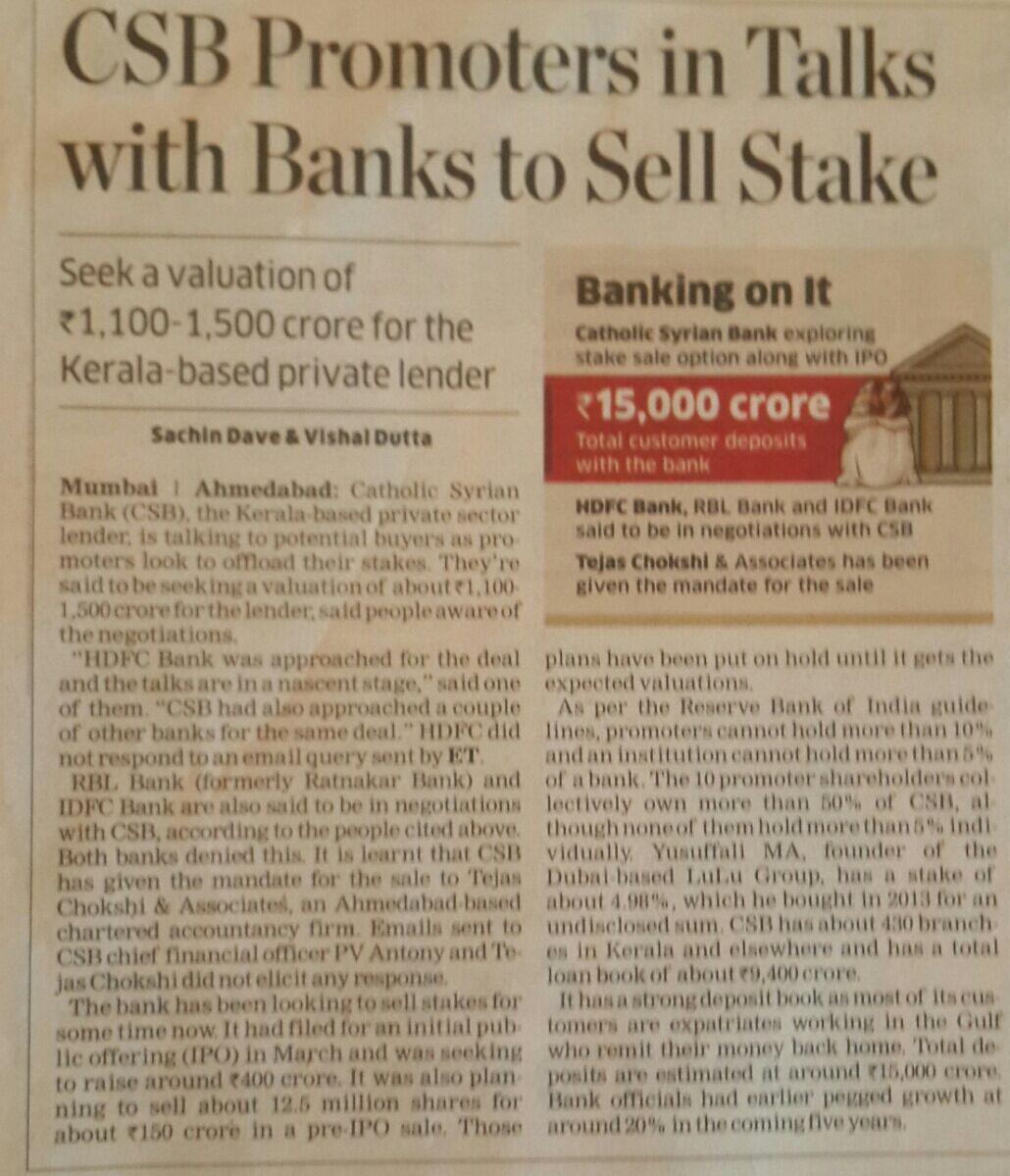