It’s significant holdings as on 31 March,2018 as per Stock Exchanges is given below:

Asia’s oldest stock exchange BSE Ltd will sell up to a 30% stake before 31 March 2017 through a so-called offer for sale (OFS) with a possible fresh sale of equity tagged on, the exchange informed its shareholders on 28 May.

The exchange could raise around Rs.1,300 crore from the sale.

BSE will hold an annual general meeting (AGM) on 24 June to seek shareholder approval for the listing, which would make it the first listed stock exchange in the country.

“A combination of an offer for sale (OFS) and fresh issue, for up to a maximum of 30% of the post-issue issued equity share capital of the company, subject to regulatory requirements”, would be considered at the AGM, said the notice. A copy of the shareholder notice has been put up on the exchange’s website.

Seeking shareholder approval takes BSE a step closer to a listing. On 14 March, BSE received in-principle approval for its share sale from the Securities and Exchange Board of India (Sebi).

BSE first approached Sebi with a listing plan in January 2013. However, the IPO proposal could not be cleared due to lack of clarity on Stock Exchanges and Clearing Corporations (SECC) norms.

Based on industry feedback, Sebi issued a notification on amendments to the SECC Regulations 2012 on 1 January. The amendments were aimed at making it easier for exchanges to list.

This allowed BSE to dust off its IPO plans.

According to a person familiar with the plans, the exchange will sell anywhere between 15% and 30% stake through the OFS.

“This is to give flexibility to the exchange. The aim is to offload a minimum of 10% and if more shareholders are interested in selling their stake, then it can go up to a maximum of 30%. The exchange and shareholders are seeking at least Rs.400 per share,” added this person, who asked not to be identified because the exchange is still firming up its plans.

If not too many shareholders are interested in selling, BSE will issue fresh equity to touch the 30% mark.

A second person familiar with the development confirmed that the exchange is seeking a valuation of Rs.400 per share-from Mint

Capital market regulator Securities and Exchange Board of India (Sebi) has provided in-principle not to BSE Ltd for an initial public offering (IPO).
BSE, the country’s second-largest exchange in terms of volume, has written to market regulator Securities and Exchange Board of India (Sebi) seeking an approval for theIPO and to list its shares on a recognized stock exchange.
Ashish Kumar Chauhan, managing director and chief executive officer, BSE said it will take around six to nine months for the exchange to file its offer document with Sebi.
“We hope that we will be able to file the offer document in the next six-nine months. As of now we don’t envisage issuance of any fresh equity. The IPO is likely to be an offer for sale (OFS) by existing shareholders,” said Chauhan.-from BS
(Anybody interested in buying/selling shares of BSE,kindly email me at Alpha Ideas )

(Disclosure:I am market making in the shares of BSE)

The chief executive of the Bombay Stock Exchange has urged regulators to allow Asia’s oldest bourse to push ahead with long-delayed flotation plans, while also calling for higher foreign investment limits in India’s domestic exchanges.

The issue has become increasingly pressing in recent months following complaints from a number of international investors who had bought stakes in the two main Indian exchanges, only to find hopes of selling them via a listing dashed by regulatory delays.

In theory, the Securities and Exchange Board of India, the markets regulator, has backed the idea of floating the country’s two main exchanges — the BSE and the National Stock Exchange, its larger competitor — a move that would bring India into line with other global economies, where major bourses are listed.

But since the BSE applied for permission to float in 2013, its application has been stuck in limbo, forcing it to mothball plans to raise $1bn through an initial public offering.

“We still want to do it,” BSE chief executive Ashish Chauhan told the Financial Times. “As soon as we get that approval, we would be able to float within a few months.”

Exchanges are keen to tap international investors, who have flocked to India and helped fuel a robust stock market rally after the election last year of Narendra Modi as prime minister. That has propelled the country into the world’s top 10 biggest equity markets, with a current total market capitalisation of about $1.44tn.

Mr Chauhan said he continues to “nudge and push” regulators to support his flotation plan. “It is basically a fear, probably, of the unknown that exchanges are getting listed for the first time. So, rightfully, they want to think it over and create a solid framework so that public trust is maintained.”-from FT 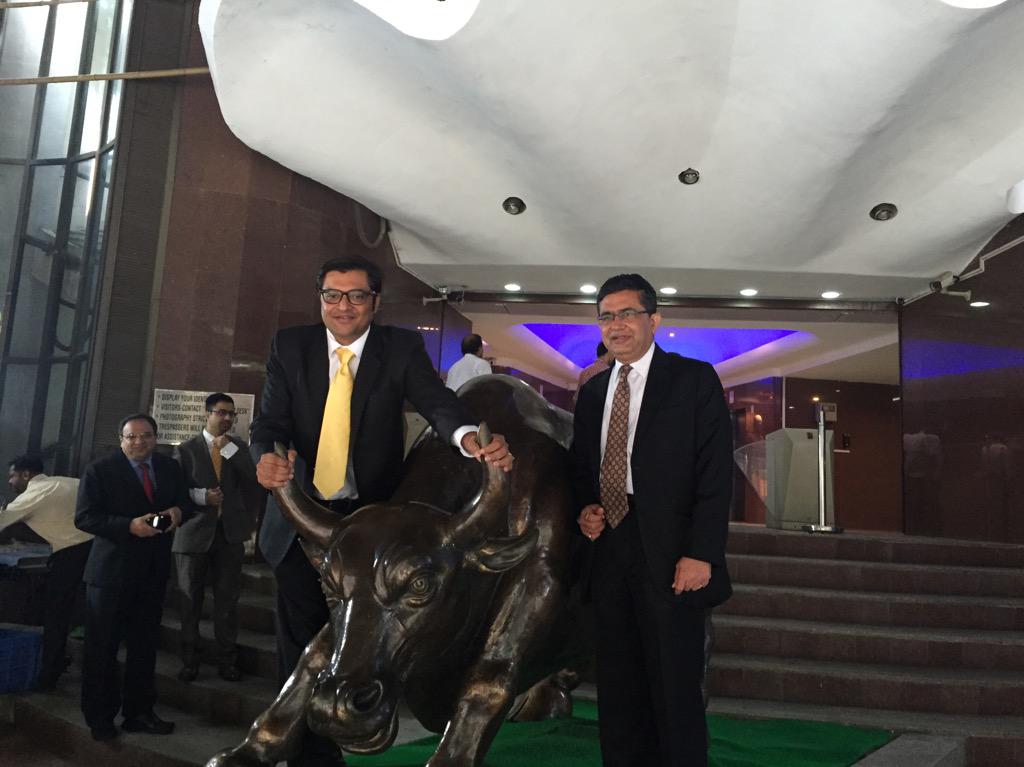