No wonder the Indian Rupee is getting crushed 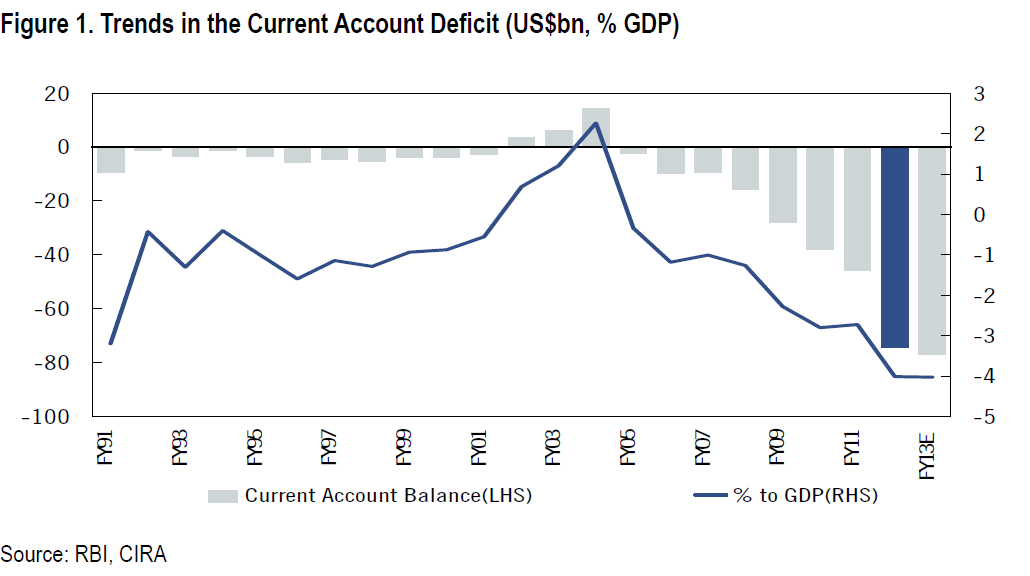 Over the last two years, India has been inflating at roughly 10% per annum. The dollar has been inflating at roughly 2% per annum. So, it is only natural that the exchange rate will depreciate; the nominal exchange rate which is correcting from the fact that the rupee has been losing value faster than the dollar. By my own calculation compared to two years ago to now, say two years ago Rs 44-45 now I would have expected it to be between Rs 51-54, roughly in that range-Kaushik Basu, Chief Economic Advisor to GoI said in an interview

In an earlier post way back in April, I had mentioned that the odds were very high for the rupee weakening.

Now that the Rupee has crashed to an all time low of around 55 Rs/$, whats next for the Rupee?

There are two distinct factors on the horizon which bode ill for the Rupee.

The first factor is that almost half of Indian reserves could vanish in the next one year.

The second factor is that FII inflows to date in Indian equities are still net positive.If they were to start selling like they did in 2008 because of geopolitical and other reasons, then the impact on the equity and currency markets would be dramatic

We are indeed living in interesting times !

The USD INR relationship for the last 20 years is as shown below:

The last 4 years has been extremely volatile due to the global crisis and the response of the Central Banks to it.

At this particular juncture, the Indian rupee looks very vunerable due to the following reasons:

3.Despite the recent CRR cut, the liquidity is extremely tight.(source:RBI) .Banks are borrowing close to 2Billion $ daily from the repo markets. RBI intervention in the currency markets will further worsen  the liquidity situation

4.Flows to the capital markets is adversely affected owing to the GAAR news in the recent budget.In the month of April 2012 so far, FIIs have invested only 36.76 Million $ !! (source SEBI)

5.The entire country is expecting a rate cut.Even though inflation figures remain elevated, the RBI governor is likely to cut rates

6.The Govt’s fiscal deficit will worsen over the year.The Food Security Bill , political compulsions and failure to meet its ambitious disinvestment targets (30000 Crores) will ensure that.

7.Geopolitical shocks such as Iran-Israel war and/or reigniting of the Euro crisis will be huge negatives for India

So the equation is:

In an earlier post, we had discussed Rip Van Winkle trades wherein you put on a trade and forget about it for the next 20 years.

While stocks,realty  etc may be some of the investment classes for such trades, even currencies can be a fertile area for Rip Van Winkle trades.

Take for instance, the historical data of USD and the Pakistani Rupee (PKR) for the last twenty years

One would have made 4x just holding onto this trade .Considering the huge leverage one could employ in the forex markets, the returns could have been much much higher

Does this trade still hold?Considering the country’s dire economic straits, radicalization of its people,the immense incompetence of its political leadership  the imminent withdrawal of US from Afghanistan and drying up of western aid, it is fairly clear that the Pakistani Rupee will head lower with time.

So the right thing to do is to sell PKR and buy USD and keep rolling the positions for the next twenty years.