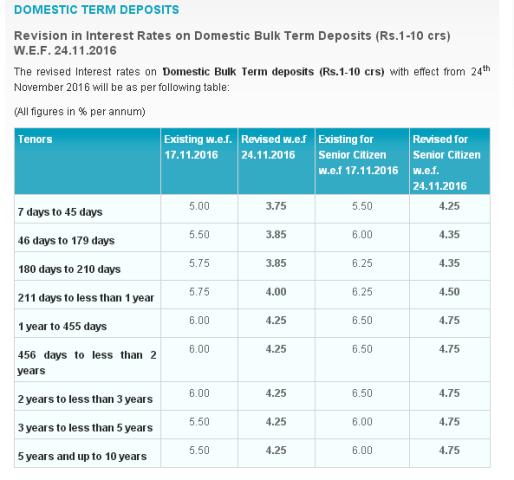 pl note this rate is for “bulk deposit”

Economy will go into a continuous dehydration circle ride.

Positive side of demonetisation: Only one: more liquidity for banks, which leads to all the above negatives. In addition, the Banks will be pressurised to lend more, and high chances that the lending will be directed to wrongful ends without financial justifications also. Already seen unjustified projects getting approvals for big loans. Many politician owned businesses are having their 1000s of crores loan proposals at the bank doorsteps.

One way this liquidity helps to recoup bank balance sheets already suffering from loan loss provisions, now the banks will need to find good credits in a deflationery marketplace.

Will the government get more revenue from money brought to banks? Will be very insignificant, as tax levy on such money is likely to be challenged in courts (Revenue has to prove that such money was all earned in one year, which will be difficult). Most money is already well distributed into multiple accounts (like Jan Dhan) as reported in media.

Just thought of sharing this circular effect that struck my mind, and also remembered the Great Depression of 1929-33 that involved withdrawal of just 30% money in circulation!